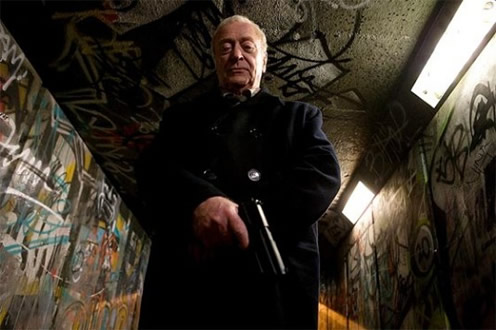 Harry Brown is the kind of movie best viewed with an open mind and an empty conscience. This tale of an elderly Royal Marine veteran who decides to police his run-down council estate with lethal force, is an undeniably brave, confrontational film that will evoke either bloodthirsty cheers or equally vocal disgust.

But boy is this film relevant. In an age where paedophiles are released with paltry cautions and delinquent teens are immune to the law, Harry Brown is certainly a film of and for it’s time. Some might argue that the sadistic revenge plot is little more than an excuse for a violence-driven strain of pornography; a right-winger’s fantasy in which chav scum are euthanized with a bullet to the head. That they’re probably right doesn’t make Harry Brown any less satisfying. Comparisons to Death Wish, Dirty Harry and the recent Gran Torino are all valid, but director Daniel Barber paints his feature but with such a thick layer of filth that Harry Brown is more in line with Shane Meadow’s Dead Man’s Shoes. The heavy score slams your senses with such a sense of foreboding that it’s difficult not to slip into Harry’s doomed battle with his nightmarish past. Unlike that last movie, there is little effort here to humanise the scum of South London, with Brown’s prey so bluntly depicted as primitive – one particular drug dealer is almost insect-like – creatures of the night that they might as well have fangs, glowing eyes and neon cross-hairs emblazoned on their foreheads.

Yet it’s Michael Caine’s turn as the eponymous crime fighter that gives Harry Brown a much needed dose of humanity. It’s arguably the 76 year-old’s finest role, and propelled by Gary Young’s slow-burning script Caine throws so much into Harry that his transformation from abandoned widower into wheezy killing machine is somehow not only plausible but oozes more cool than a dozen other more franchisable action heroes. There’s also some able support in David Bradley as Harry’s one remaining friend Leonard, whose murder by the tunnel-dwelling hoodlums sets everything in motion.

Ultimately, Harry Brown’s greatest failing is that Barber clearly has something to say, but struggles to decide exactly what that something is. The subplot involving Emily Mortimer’s earnest police officer feels severely underdeveloped, while the film’s bleaks epilogue might have been poignant had Barber not taken such glee in Harry’s trail of murder. And the film’s apparent message, that neighbourhoods would be safer for all if residents enacted bloody vengeance on local miscreants, is juvenile enough to leave a bad taste in all but the most amoral and fascistic male teen.

Gruesome and morally-confused Harry Brown might be, yet placed alongside such derivative revenge flicks as Taken it feels remarkably fresh. Amidst South London’s bleak cityscapes, it’s impossible not to root for Caine’s weary vigilante. Few of those viewers who do happen to leave Harry Brown feeling dirty and ashamed will deny that behind the stylised carnage are some thought-provoking themes; it’s just a shame that Barber and Young didn’t have the courage to take these topics in a more cerebral direction.