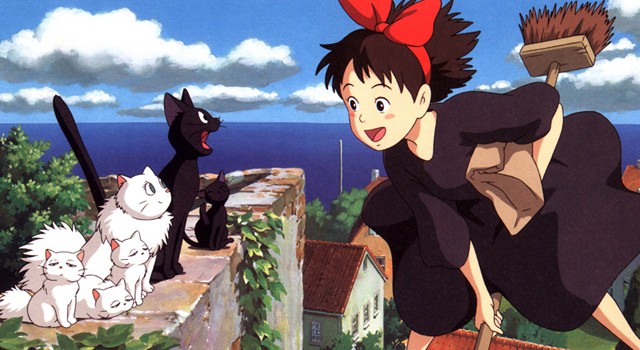 I first caught Kiki’s Delivery Service over a decade ago, in the early hours and on the sort of now-extinct cable channel that seemingly relied solely on the viewership of insomniac geeks. I was so charmed by it that I immediately made it my goal to hunt down all of Miayzaki’s movies. Since then, Studio Ghibli’s portfolio has received recognition from Western critics and families alike, and Kiki’s Delivery Service still stands as one of Miyazaki’s finest.

The eponymous Kiki is a young witch, who, according with witch tradition, must leave home for a year upon reaching the age of thirteen. Accompanied by her familiar; a talking black cat named Jiji, she heads to the port city of Koriko, where she uses her ability to fly to set up a delivery company. But it isn’t long before Koriko’s alien sights, sounds and locals steadily bring out Kiki’s insecurities. Alongside Spirited Away, this adaptation of Eiko Kadono’s novel is perhaps Miyazaki’s most accessible take on “the gulf that exists between independence and reliance” in girls entering their teens. It’s a quaint film, but one which is no less touching for all its cosiness.

A climactic airship rescue feels somewhat tacked on and unnecessary; the film’s most affecting moments are when Kiki is torn between two worlds, both physically and figuratively. She yearns for friendship yet is afflicted by depression and self-destructiveness whenever local nerd Tombo shows her affection.

There’s a fair new extras on this Blu-ray Double Play including complete storyboards, a bunch of documentaries both new and old, a new producer’s perspective and a look at the dubbing process. The film has never looked better, either, though the film’s beautiful painted backdrops benefit from the format more than Ghibli’s elegantly simplistic character designs. The Blu-ray features both the original Japanese audio and an English dub featuring the voices of Kirsten Dunst, Janeane Garofalo and Debbie Reynolds. It’s not a bad dub, either, but I’ve no interest in it – Studio Ghibli’s films are so unquestionably Japanese in terms of tone, style and mythology, that I feel that Kiki’s Delivery Service loses some of its charm in translation. That said, if it allows you to enjoy these films with your family and littluns – who will simple adore the talking cat and flying sections – then the English dub is more than tolerable.

The Kiki’s Delivery Service Blu-ray will be released in the UK on the 1st July, courtesy of StudioCanal.