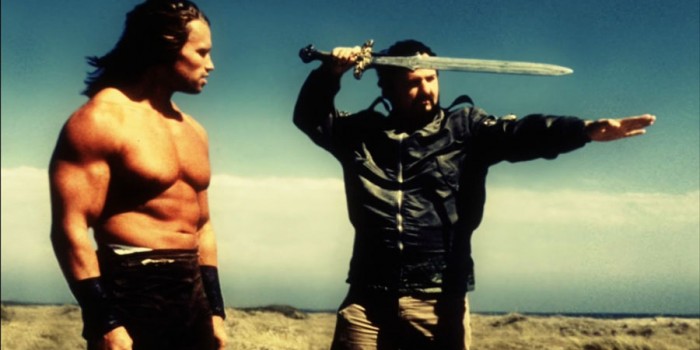 Cinephiles will enter Milius with some knowledge of John Milius, the writer of Apocalypse Now, director of such macho movies as Conan the Barbarian and Red Dawn, and the unsung master hard-boiled 70s dialogue. But I feel that a larger portion of viewers will watch Zak Knutson and Joey Figueroa’s affectionate documentary for another reason: its subject was reportedly the inspiration behind Walter Sobchak in The Big Lebowski.

By reportedly I mean clearly. It’s not difficult to spot the personality traits shared by John Goodman’s gun-toting Vietnam vet and the larger-than-life John Milius, either. Though whether the filmmakers struggled to find a single photo of Milius not maniacally wielding a firearm or simply omitted the images which did not suit the film’s message is another matter entirely. But with commentaries from the likes of Steven Spielberg, George Lucas, Martin Scorsese, Oliver Stone and Harrison Ford, this warm doc reveals a perfectionist whose reputation as a self-proclaimed “zen anarchist” is debunked by those who know him as a persona and no less a work of male fantasy than his violent fictions.

Knutson and Figueroa take us from the origins of Apocalypse Now through to Milius’s fall from grace due to his outspoken political views and his recent stroke. There’s good reason why, given his pedigree, he’s not nearly as highly regarded as his contemporaries. Milius’s last notable directorial effort, the Commie-bashing Red Dawn, came a decade too late and essentially marked him by the Hollywood machine as a problematic artist who’d gotten out of hand. The documentary occasionally gets tangled up in Milius’s life outside of Hollywood, but it’s the background narrative here which proves most interesting; the story of a 70s Hollywood which had lost its audience and had nothing to lose from taking risks on a pool of talented but unproven film students such as Spielberg and Scorsese.

John Milius embodied that era’s maverick spirit, and while his career seems to have seen a resuscitation with the likes of TV series Rome and an upcoming Genghis Khan biopic, the film is at its most focused and fascinating when depicting an ideas man whose merry machismo played a vital part in taking the scripts for Jaws and Dirty Harry from good to truly great.