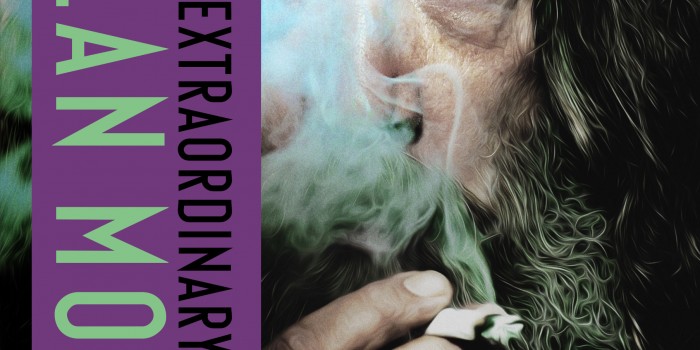 I’ve long been of the opinion that a writer’s inner workings will always be apparent within their work, and that studying an author will never bestow any enlightenment or additional value upon their words. As a result biographies have never really interested me.

Magic Words: The Extraordinary Life is perhaps that inevitable exception.

In bearded virtuoso Alan Moore, Lance Parkin has found that rare subject for a biography. Moore is virtually a mythical entity, much in part to his own mischievous tattletale nature and his long-standing and convoluted departure from mainstream comics. He’s the genius who wrote such masterpieces as Watchmen and V for Vendetta… the druggy weirdo who heralded the ‘Invasion’ of the British comic writer in the 1980s… the outspoken curmudgeon who severed his ties with Marvel, DC and pretty much anyone else… the principled artist who refused the royalties from numerous Hollywood adaptations… the eccentric occultist who never abandoned his humble Northampton backdrop… and so on. I’ve long had my suspicions that Alan Moore is whatever random personality Alan Moore wants us to think he is at time of interview.

Parkin’s biography has received the blessings of the notoriously pernickety man himself, which is no small feat. Much like Moore, Parkin has that gift for, to paraphrase Woody Allen, “romanticising it all out of proportion”. He chronicles Moore’s Northampton upbringing and surprisingly slow rise to fame with both a fixed reverence and a wide-reaching level of perspective regarding the comic industry.

The book’s early chapters may be infused with a sense of impending grandeur, but the controversies which followed much of Moore’s 80s work are handled with a far more even hand. Occasionally Parkin’s completist attention to Moore take the tale off course (I had to skip the lengthy breakdown of Moore’s play Another Suburban Romance), but there’s the overriding sense that, when dealing with someone as complex and contradictory as Moore, nothing is trivial.

I mentioned in a previous post that Magic Words is lavishly designed, and has clearly been produced with the book appreciator and collector in mind. Which is wonderful, but I’d recommend this fittingly hefty tome to not only comic collectors, aficionados and aspiring writers but a far wider audience. Moore’s tale is one of a principled man whose (often skewed) artistic integrity has perhaps cost him dearly.

Parkin’s suitably lengthy tome is as obsessive, heartfelt, provocative and indirect as its subject. But Magic Words is also a surprisingly pertinent read. Parkin paints a messy but fascinating portrait of a writer whose superior takes on mainstream superhero fare came from a deep affinity for underground and self-published comics, and a vocal hatred for the business practices of the giants which still dominate the industry.

One thought on “Magic Words: The Extraordinary Life of Alan Moore Review”