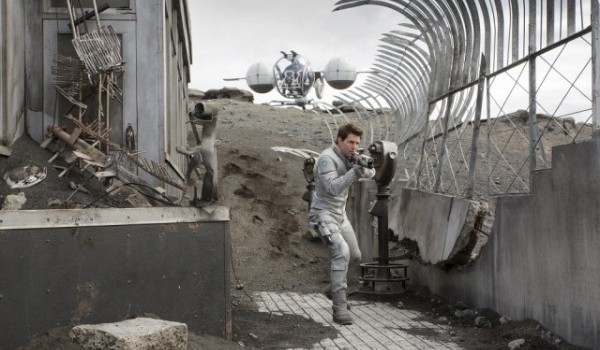 Based on director Joseph Kosinski’s equally luscious graphic novel, Oblivion sees Tom Cruise’s technician Jack Harper – which has to be one of the most generic protagonist monikers I’ve heard in a long time – wander lonely through a desolated Earth after aliens known as Scavs blew up our moon. The strike, we are told, caused environmental catastrophe, and forced humankind to flee to Titan. Jack is plagued by dreams of a good looking woman, and memories of them atop the Empire State Building, while he struggles with a sterile relationship with partner/lover Victoria (Andrea Riseborough). When that woman (Olga Kurylenko) conveniently falls from the sky, Jack’s understanding of the world and his role in it is soon turned upside down… and while several of Oblivions many twists are revealed in the trailer, I’m going to rise above such cinephilic cruelty, and leave the synopsis at that. In short, Oblivion is an interesting, enjoyable sci-fi movie that would have been far more enjoyable were it not so damn familiar.

Kosinski’s last effort was the similarly hollow but dazzling TRON Legacy, and with Oblivion he is again more invested in sleekly designed technology than the humans who operate it, and the result is not nearly as affectionate as a movie this derivative perhaps needed to be. Kosinski is the sort of talented visionary who would benefit from having his budget halved. But the imagery on display is nevertheless stunning. The wounded  moon, frequently used as a reminder of the Scav assault, is used to wonderful effect, and the film is at its best in the first act, when Cruise (delivering  the usual, reliable everyman performance)  wanders, WALL-E style, through a decayed stadium and soars across empty landscapes in a neat but overused bubble craft.

Ultimately, then, Oblivion is an honourable failure. Not because it’s a bad film, but because it suffers from a bit of an identity crisis, and ultimately pays homage to other, better sci-fi movies, without ever carving out its own identity. Kosinski tries to merge the thematic drive of more contemplative 70s sci-fi movies such as Silent Running with the dogfights of Star Wars and the otherworldly visual spectacle of 2001: A Space Odyssey (the final 20 minutes are similarly stunning), and the resulting hotpot is a mess of exhausted ideas and unfocussed narrative. Despite all this, I still enjoyed Oblivion. It’s the sort of film I suspect will find its home on DVD/streaming/Blu-ray… and whatever newfangled contraption we’ll be watching movies on in the near future. Removed from the world of extortionate cinema prices and the sort of mainstream audience expectation that Cruise’s involvement will attract, I believe Oblivion will gradually secure its own loyal following. Despite its conflicted ambitions, flawed storytelling and uneven pace, it deserves some love from genre fans.