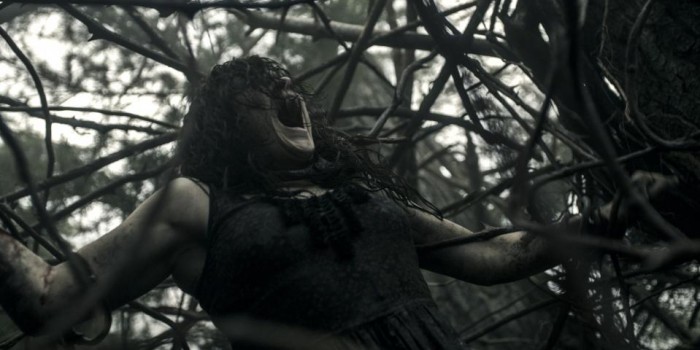 This is a difficult review to write. I’m an odd Sam Raimi appreciator, in that I virtually worship Evil Dead II as the Holy Grail of filmmaking, have watched the various editions of Army of Darkness to the point that I not only know each word for word, but could probably accurately hum Joseph Loduca’s fabulous pre-Hercules score throughout… and yet the original film leaves me feeling somewhat hollow. As a low budget debut, it’s technically magnificent, but the original Evil Dead never scared me or thrilled me as it clearly did many others. One thing I need to get out the way before entering fully operational rant mode on Fede Alvarez’s reboot/remake/sequel is that the 1981 classic was never funny. Complaints have been aimed at the lack of depth and humour present in this revitalisation of the irregular franchise, when in fact the film it remakes had very little of either of those. Evil Dead II, Raimi’s remake/sequel had chuckles and charm in spades, but the original had only one goal; to gross out its audience. Which it did. And the Evil Dead series has never been deep.

That said, there’s definitely something missing in this “reimagining,” which replaces Ash and company with a similar collection of horror stereotypes; a group who’ve gathered at an identical old cabin in the woods to force drug addict Mia (Jane Levy) to go cold turkey. In the cabin’s basement the Scooby Gang soon discover a book, wrapped in flesh, sealed with barbed wire and surrounded by animal corpses. Naturally, one of the little idiots has to go and read from the tome, and… you know the rest. What ensues is one of the bloodiest and most brutal ordeals I’ve endured in a long time. No, it isn’t scary, but cinemagoers wanting nothing but gore and carnage will surely leave satiated. However, those who remember the original two films (this movie essentially grafts bits from both) may begin to find things numbingly familiar.

While on a technical level the movie doesn’t compare to Raimi’s debut, it’s shot with considerable flair, and Alvarez’s much touted adherence to practical special effects definitely pays off. Genre fans may find the convincing effects alone worth the price of admission. But Alvarez doesn’t understand that what made the original so scary wasn’t the graphic violence but those tense moments of calm before the storm. Here the violence is piled on with such relentless enthusiasm, that I found myself wondering when it was going to end. Evil Dead is, rather ironically, a soulless affair. It doesn’t help that the film’s best moments are in the trailer. Quite what impact Diablo Cody had on the script is unclear, but the film doesn’t bear her stamp; the occasional reference to lines previously delivered by Bruce Campbell only further emphasises just how lacking in personality Mia and company are.

By its very nature, the horror reboot/remake can only fall into one of two categories. It’s either a) an ineptly manufactured insult to a sacrosanct cult classic, or b) an interesting and proficiently executed reproduction which offers a fresh take on the source but ultimately still comes across as a bit pointless. Despite its best intentions, Evil Dead was never going to be anything more than the latter. It’s not terrible, and uninitiated genre fans will surely lap up its numerous eviscerations and dismemberments… but I doubt that many of them will still be revisiting this particular instalment in 30 years time.