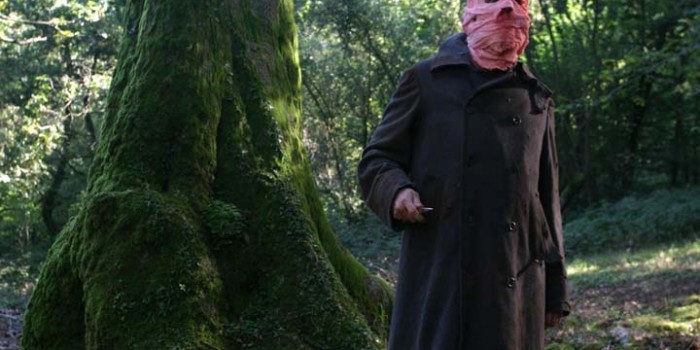 Were there such thing as a regulatory filmmaking handbook, it would clearly state that whenever man travels back in time he must either a) risk endangering his own birth or existence, or b) be responsible for his chronological reallocation in the first place. Timecrimes, the inventive debut from Spanish director Nacho Vigalondo brashly follows the latter rule, playing with the concept a predestination paradox to knowingly preposterous lengths. When the film was shown at the 2008 FrightFest, its fusion of science fiction, horror and black comedy definitely stood out from a majority of slasher flicks and gore movies. When slothful, incompetent Hector (Karra Elejalde) spots a young woman undressing in the woodland vicinity of his new country home, he waits patiently for his wife to embark on a grocery run before investigating. His quest for a further glimpse of flesh is cut short, however, when he is attacked by a sinister character in a grossly misshapen pink head bandage. Injured and perused, Hector breaks into a nearby property, where he is convinced by a scientist to hide inside a large contraption. He emerges an hour into the past, where he is strongly advised to avoid any contact with the present version of himself who is repeating the very movements that got him there in the first place…

Here’s where Timecrimes branches off from most conventional sci-fi. Hector, a sort of Spanish Homer Simpson without the oafish charm, is incapable of grasping the fundamentals of his predicament. It takes him some time to realise that the “intruder” spending time with his wife is in fact himself, and his inability to grasp the severity of his situation lead to some darkly comic moments. Hector’s desperate efforts to prevent his leap through time all end up being instrumental in his travel. Of course, he could just put on the kettle, wait things out for an hour and let time catch up with him, but that wouldn’t be particularly entertaining, would it?

Vigalondo’s similarly gloomy Oscar nominated short 7:35 de la Mañana announced his uniquely droll style, and Timecrimes does feel like a brief concept stretched beyond its limits. When Hector retreats back into the past for a third time, the film’s gimmick has already run its length. But it’s an involving if demanding movie, expecting audiences to make mental notes of what initially appear to be random events but are indeed the work of multiple Hectors all intent on making sure that time stays intact.

Shot with but four actors on a limited budget, Timecrimes exhibits brains over special effects-driven brawn and like 2004’s equally inventive Primer, it’s a memorable and intelligent brainteaser. Writer/director Nacho Vigalondo perhaps falls short of his ambitions but should nevertheless be applauded for what is one of the few genuinely innovative sci-fi/horror movies made in the last decade.