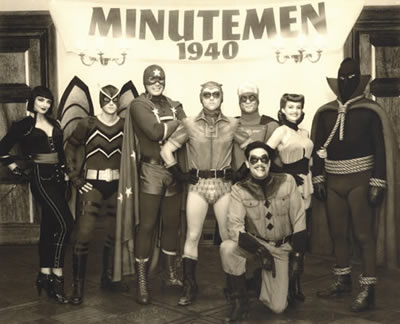 A bit like the archetypal half-caste kid who is unwanted by both the bloodlines he is born into, anyone brave enough to tackle as monumental a project as bringing Alan Moore’s Watchmen to the big screen is going to suffer condemnation from fanboys and Joe Public alike. So richly marinated in its own alternate history, Moore’s multi-layered plot would only alienate those unfamiliar with the source material, while any creative tinkering with the treasured characters or plot would have the comic book community crying out for blood. Though more prolific (and arguably more talented) director’s including Terry Gilliam, Darren Aronofsky and Paul Greengrass have been associated with the project, Zack Snyder’s intentions for the adaptation cannot be faulted. But in keeping so rigidly to the graphic novel, his three hour effort loses its vigour, suffering pacing problems that a more confident auteur may have worked around. I say “may”, for in all honesty Watchmen is, as expressed by Moore time and again, quite unfilmable. That Snyder grafts something both comprehensible and entertaining out of Moore’s multi-layered magnum opus is in itself an achievement.

I shan’t excessively elaborate on Watchmen’s dense plot, as I feel somewhat obliged to. The year is 1985, Nixon is on his fourth term, the superpowers have one another in their missile sights, superheroes have been outlawed, and retired crime buster The Comedian has just been murdered. Like the graphic novel from whence it came, Watchmen is less a plot than an elaborate series of ideas and themes which explore what the superhero would mean to a world that actually required one. The incredible title sequence, which flashes through Moore’s elaborate history to the wails of Bob Dylan, compete with re-enacted Kennedy assassination and moon landing, fills in the initiated as well as could possibly be expected.

The casting is a mixed bag. Jackie Earle Haley excels as the sociopathic Rorschach, and is mesmerising both with and without the inkblot mask. Fellow Little Children actor Patrick Wilson brings an encumbered charm to Nite Owl, whose bookish impotence and muscular frame shift with a change of costume. Jeffrey Dean Morgan is also pretty good as the sadistic Comedian, a character whose presence lingers long into the movie despite dying pre-titles. And Dr Manhattan, brought to life by Billy Crudup, is a soulless and inexpressive CGI creation; though in this case that’s entirely the point.

Unfortunately, these performances are balanced out by several jarringly bad ones. Malin Ackerman’s Silk Spectre II is bland and vacant, while Matthew Goode is unbelievably ill-cast as Ozymandias, the world’s smarted man, delivering his lines with the confidence of a talent show contestant. And while modern special effects can render a big blue penis with startlingly flaccidity, the aging effects on Carla Gugino’s original Silk Spectre are poorer than those used on Back to the Future II some 20 years ago.

Few films will suffer such intricate dissection as Watchmen, and with nearly a quarter of a decade to manifest itself in the head of everyone who’s read it, Moore’s novel has achieved a level of omnipotence that would make Dr Manhattan shift towards an envious green. But the book itself was not without its flaws, and though by maintaining the film’s 1985 setting Snyder absolves himself of some of the more dated ideas, while also identifying Watchmen from its contemporary imitators, the film frequently feels as though it needs swifts surgery with a pair of scissors.

Snyder’s slick, synthetic visuals too often invite Naked Gun levels of lampoonery yet the film lacks the wit of Moore’s work, as well as the sense of playfulness of ideas that he’s long revelled in. Uncompromising in its vision it may be, but the film is at times feels inhumane; for all his visual flair, Snyder doesn’t know when to hold back. Slow motion drags at every punch and CGI button, while flashbacks stay so faithful to the book that they seem out of synch.

If this review has chiefly travelled a negative path, that may be because it’s so easy to pick at Watchmen; but there’s an awful lot to love. Neither the classic it could have been, nor the abomination it should have been, Watchmen’s clusterfuck of ideas hit far more times than they miss. One only has to read about the PG-friendly, Happy Meal viable Hamm and Hayter scripts to appreciate that this movie could have been much, much worse. Though it is tempting to make large of Snyder’s directorial shortcomings, he has guts, if not the soul to give his character’s that essential layer of humanity.