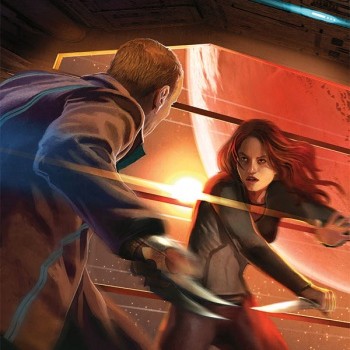 Commander Shepard’s impact on the Mass Effect universe may be over, but as with any good sci-fi franchise, the storytelling possibilities are endless. Dark Horse has announced Mass Effect: Foundation, an ongoing series based on the Bioware trilogy.

Written by Mass Effect 3 story lead Mac Walters, who has so far been responsible for much of the franchise’s comic book output, Mass Effect: Foundation will follow a new protagonist, the mysterious red haired woman depicted below. Previous Mass Effect comic series have all been decidedly hit and miss. Redemption was a decent enough prequel to the second game and led to the excellent Liara T’Soni-centric Lair of the Shadow Broker DLC; Evolution pretty much downgraded the ambiguous Illusive Man by detailing his lacklustre origin story, the Omega-based Invasion was readable but ultimately pointless, and the ensemble Homeworlds… er, by then the Mass Effect hype had dwindled and I couldn’t be bothered with that one.

However, so far much of the ME expanded universe has been slavishly based on and around characters and locations from the video game trilogy. It’ll be interesting to see where Dark Horse takes the series; I’ve always been of the opinion that the better Star Wars spin-offs have been the ones that have distanced themselves the furthest from the source material.