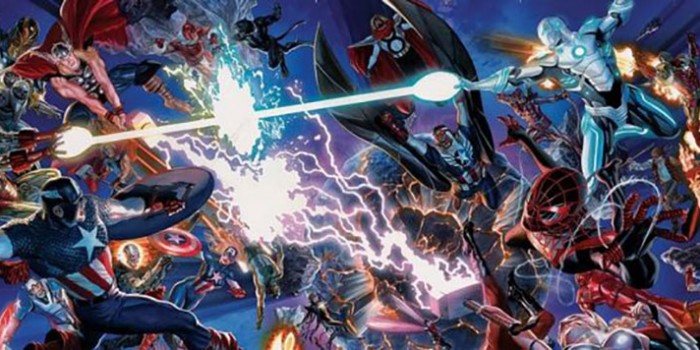 Today Marvel answered the question we’ve all been asking: “just what the fuck are those teasers for past Big Events all about?”

Well, those promo images turned out to be teasing the most obvious choice, an extended reiteration of the original 1984 Secret Wars miniseries. Only this time, shit just got multiversal.

It’s a decent idea, as far as annual celebrations of the Marvel Universe go, and will allow for an assortment of cult favourites to crawl back out of limbo and/or potentially join the Earth-616 crew. However, with the recent announcement of DC’s similarly multiverse-driven Convergence, one can’t help but notice that Marvel and DC are both in a  bit of a creative crisis. The global success of their movie and video game franchises have granted both companies a larger level of mainstream interest than they’ve arguably ever enjoyed, and yet sales-wise the source material (I think they call them comic books) is now but a small part of the money making machine. Both publishers are torn between catering to new audiences and standing behind older long-term fans whose wallets haven’t been swayed by video games and other new mediums.

Hence the battle royale formula, allowing for unfamiliar faces to return via an immediately accessible premise.

But maybe that isn’t such a bad thing. I mean, if Marvel can come even close to topping this, I’m in: