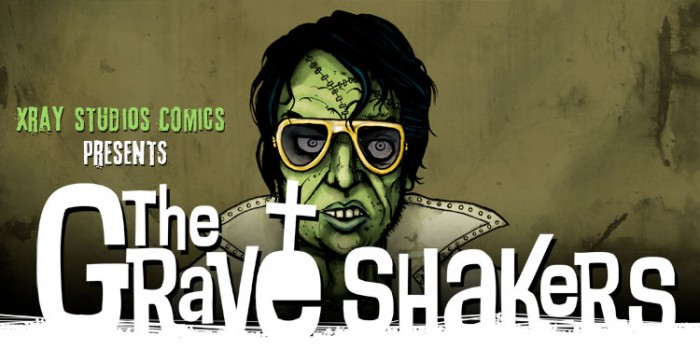 The 4-part miniseries sees famous rock icons brought back to life by mad scientist Doctor Sponglehoff, who plans to combine his two great passions, “genetic re-animation and rock and roll.” Enter burger flipper Randy, whose ambitions to become a music manager for unappreciative girl group The Cruelettes brings him and the band to Sponglehoff’s island, where Elvis, Buddy Holly, Marc Bolan and many more are being dragged back from the hereafter for the monster mash to end all others.

Visit www.thegraveshakers.com to read a flash version of the first issue of The Grave Shakers, or enjoy the rather groovy trailer. If you’re a stickler for traditional comic distribution methods, physical copies are also available for 10 Aussie dollars.  It’s a brief but immensely fun read, with some truly demented looking characters by Foxall.

The Grave Shakers tells the tale of a mad scientist turned rogue record label boss who uses cutting edge cloning technology to reanimate dead rock stars. A struggling all girl rock band and their bumbling manager are roped into the scheme and soon find themselves up to their eyeballs in undead menace. A rollicking rock and roll thriller ensues in the cinematic tradition of Kiss Meets The Phantom of the Park and The Boys From Brazil.

For those visitors residing in Sydney (anyone?), Mike Foxall will be showcasing The Grave Shakers at the forthcoming Homebush Supanova pop culture expo from June 18-20.