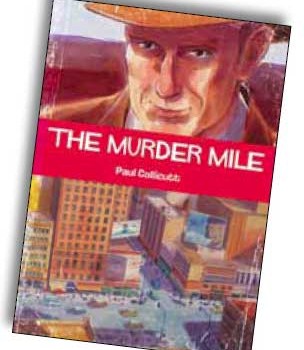 Publisher SelfMadeHero is releasing The Murder Mile this February, a detective story from Brighton-based based artist (and athlete) Paul Collicutt that is set during the era of Roger Bannister’s world record-breaking four-minute mile. “A mile can be a long way to run when you have killers gunning for you. Brighton-based based artist and athlete Paul Collicutt brings together his two passions in this detective drama set during the era of Roger Bannister’s world record-breaking four-minute mile. Arizona, 1954 and runner Todd ‘The Phoenix Flyer’ Naylor is found dead. P.I. Daniel Stone’s investigations find him increasingly ensnared in a web of conspiracy, cartels and communists.”

Fittingly, the book will include an introduction from Olympic gold medallist Steve Ovett.

The Murder Mile is out 21st February. Visit selfmadehero.com for more.

About the writer/artist
Paul Collicutt studied illustration at Brighton College of Art. He won the Parent’s Gold Choice Award in America for This Train. The Murder Mile is his first graphic novel for adult readers. It combines his love of painting with his keen interest in track and field. Paul is a club runner, a qualified athletics coach and Chairman of the Phoenix Athletics Club.

About the publisher
SelfMadeHero is a publisher of the finest fiction, biography,
history and humour in the graphic novel medium that
showcases leading authors and artists from around the world: from the quirky and humorous to the political and profound.