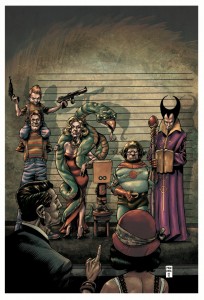 Here’s a (teeny) sneak peek at Image Comics’ new cover for the second printing of Todd, The Ugliest Kid on Earth.

The demented new series  from writer Ken Kristensen and artist M.K. Perker seems to have found its audience, and reportedly sold out in less than a day due to positive press coverage. Image are giving new readers a chance at getting on board, as well as presenting collectors an incentive to buy the premier issue a second time, with a variant cover that offers a neat reiteration of the original identity parade concept. And here’s the original cover, for reference: