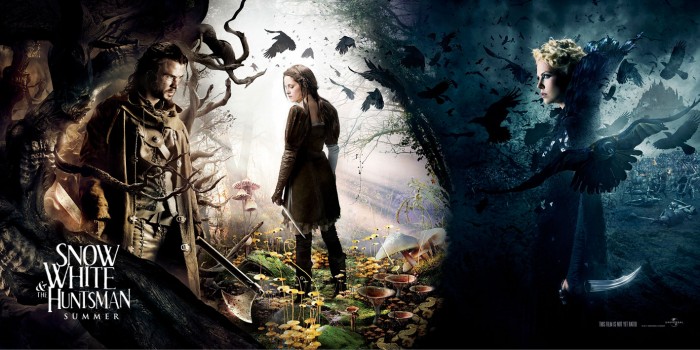 As someone whose interest in mainstream comics is slowly diminishing with every year that passes – be that due to persistent rebooting, genre oversaturation or, most likely, my undernourished wallet – I find the Headhunter’s Challenge one of the most exciting categories in this year’s Eagle Awards.

Based around the upcoming movie Snow White And The Huntsman, comic creators were invited to produce a 5-page story with a plot that was in some way connected to the film’s “dark fantasy setting”. Now, the comic-reading public is being invited to decide the outcome in a head-to-head finals.

And while the trailer for the movie looks pretty inspiring, both of the finalists’ efforts; ‘The Land of All Sorts’ (by Richard Worth and Jordan Collver) and ‘A Life of Death’ (Brady Sullivan, Phabio Pio, James Abels and Fred C. Stresing) are distinct and interesting in their own right, and well worth a gander.

Both stories in The Huntsman’s Challenge new comics talent competition will be printed in the MCM London Comic Con (25th May) show programme. Visit www.eagleawards.co.uk to view each comic now and make your vote.

Inspired by upcoming Universal Pictures movie Snow White And The Huntsman, the competition challenged comic creators to come up with a fully finished, coloured and lettered five page story with a plot relevant to the film’s dark fantasy setting.

The panel of judges – Titan Publishing senior editor Steve White, bestselling writer Tony Lee and Eisner-winning artist Mark Buckingham – have selected ‘Land of All Sorts’ in the Best Story category and ‘A Life of Death’ for Best Art and Design.

Now you can read both comics on www.eagleawards.co.uk and let us know whether ‘A Life of Death’ or ‘Land of All Sorts’ should win the MCM Expo Award For New Visionaries at next month’s Eagle Awards ceremony at MCM London Comic Con.

“It’s wonderful to see so many talented comic creators taking up the Huntsman’s Challenge,” commented MCM co-organiser Paul Miley. “The artwork and writing of the entries has been of an amazingly high standard, so it’s a great achievement for Land of All Sorts and A Life of Death to make the final pair.”

“I’m thrilled by the enthusiasm the participants have shown and the quality of the work submitted,” added Eagle Awards chair Cassandra Conroy.
About the Eagle Awards

Introduced in 1976, the Eagles are the comics industry’s longest established awards. Acknowledged as the pre-eminent international prizes, they have been featured on the covers of leading US and UK titles over the last 28 years ranging from Uncanny X-Men and Swamp Thing to MAD Magazine and 2000 AD. Unique in the comics industry in that they reflect both the professional and the reader’s choice, the Eagle Awards consist of two stages:

(i) A Nominations Round allows the entire comics community to choose their favourites.

(ii) The top five nominations then appear on the voting form for the readers and fans to choose from, focusing the voting public on the main contenders resulting in no wasted votes.

About the MCM London Comic Con

MCM London Comic Con is organized by the MCM Expo Group as one of a number of pop culture events in their portfolio. London Comic Con is supported by major media companies such as Universal, Twentieth Century Fox, Warner Bros., Disney, Nintendo, Manga Entertainment, SFX and NEO to name but a few. Taking place each May and October at London’s massive ExCeL exhibition centre, the MCM London Comic Con is now the main focus and must-be event for UK fans and industry to attend to promote new releases and forthcoming productions whether comics, movies, videogames, DVDs or books.

Over the last decade, the MCM London Comic Con has grown into the one UK show that is not to be missed. For more, visit www.londoncomiccon.net.