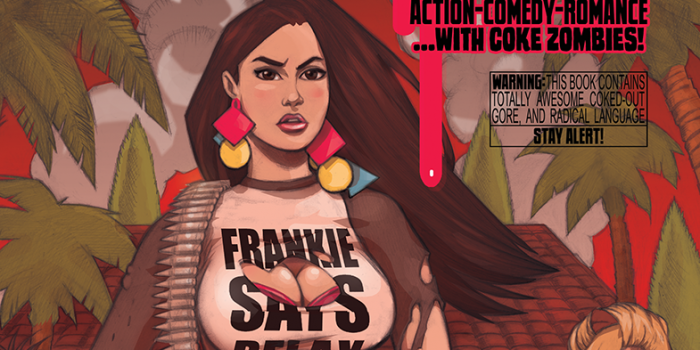 Action Lab Entertainment formerly announced the formation of their new mature readers imprint entitled, Action Lab: Danger Zone, and now the first books from the new line are making their way to release.

Starting this May, fans can pick up a full line of new creator-owned titles via comic book shops, as well as all major digital providers, bookstores, and anywhere comic books are sold. Each month will see new mature-themed titles debut, showcasing boundary pushing, genre-redefining material suited to today’s contemporary comic book readers. Comic shops can already –order titles such as new ongoing series Ehmm Theory, and Ghost Town, as well as the original graphic novel, The Trip , and four more titles– the ongoing The Final Plague, Night of the 80’s Undead, the trade paperback collection of Double Jumpers, and the SubCulture Omnibus following for pre-order in June. There will be even more new titles, like the cult hit, Zombie Tramp, to release in the months to come!

With the emphasis on fun no-limits content, titles offered range from comedy, to horror, to science fiction, to whatever creators can dream up!  Danger Zone is the place where anything goes, both for readers and creators. As with any independent publisher, Action Lab is tirelessly working to get this exciting material in front of as many eyes as possible, so be sure to check Danger Zone and these new titles out on the web and in the Diamond Previews catalog when you see them. Fans of genre fiction done right have a new home in…the Danger Zone!

You can see a free PDF sampler for the line now here.

Action Lab received two Eisner nominations in 2012 for its critically-acclaimed all-ages comic Princeless, and has been praised for its diverse library of titles, including Pirate Eye, Fracture, and works like the upcoming Skyward and Odin Jones.  Be sure to visit the Action Lab website http://www.actionlabcomics.com for more information, including links to social media outlets and submission information.

Synopsis – Gabriel Ehmm has awoken to a world where zombie ‘little people’ rise from graves, someone calling himself Saint Peter offers bargains, and his pet kitten can now talk. Connected by blood and straddling the afterlife, Gabe and Mr. Whispers (the aforementioned talking cat) begin a universe-spanning adventure in the first issue of this mind-bending and genre-blending new series. Synopsis – Moments after scientists create a time machine, terrorists steal and weaponize the device, sending bombs into the future. Las Vegas evaporates in flame as the terrorists reveal their future target: Washington DC. Now, the FBI must find the terrorists before the capital becomes a Ghost Town. The clock is ticking. Synopsis – A group of college kids on a desert-baked road trip take a Native American drug that unlocks their deepest fears. Now, if a teenager and his grandfather from the local reservation can’t find them in time, they’re going to have to face their own personal terrors, or be consumed by them! The Trip is an Indian drug fueled ride into horror!! Synopsis – The Final Plague has begun, and with it mankind’s final hours. Can a rural Iowan family survive the initial onslaught of crazed, rabid animals, presumably the product of a mutated super-virus? Or will they succumb to the plague that threatens to end all life as we know it? Synopsis – It’s 1986, and Russia’s last ditch cold war effort is to strike at our American excess lifestyle with bio-engineered Colombian cocaine. What happens when two girls out for a good time cross paths with a huge celebrity party hyped up on commie zombie blow?!?! Radical undead action man! Totally!! Synopsis – The cult hit of 2012 is finally collected! After Jason and his team of programmers get stuck in their virtual reality game, Dungeon Lords, they must find a way back to the real world. Unbeknownst to them, the fantasy characters they inhabit have taken control of their bodies… and now wizards and warriors run free in Las Vegas! Synopsis – Everything SubCulture in one book!  Join Jason, Arthur, Noel and the entire Kingdom Comix crew as they live–and enjoy–the geek life in this funny and poignant look at fanboy (and fangirl) culture.  This 344-page tome collects the critically-acclaimed four-issue mini-series plus all 501 webcomics published between 2008 and 2012.  Also includes dozens of strips from guest artists, pinups, and behind-the-scenes features.  Also comes in a limited edition hardcover!