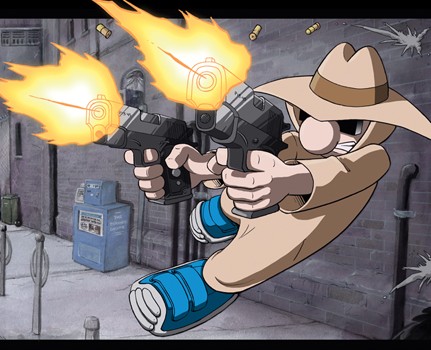 Mike Kitchen is the creator of Spy Guy, a hard-boiled funny book telling the story of an undercover Toronto city cop. Published through Ultraist Studios, the initial series of Spy Guy one-shot comics consisted of Spy Guy: Bootleg, Spy Guy: Minis and Spud & Harry #1. In the summer of 2009, Mike released Spy Guy #1 (of the Unlimited Series) which also launched as a part of Indy Comic Book Week 2009.

In mainstream media, Spy Guy appeared in Superhero Movie’s convention battle sequence and Mike was featured in an interview on TV’s Electric Playground.

In addition to his comic work, Mike has animated for feature films (Final Fantasy: The Spirits Within, Hellboy, Constantine, 9) and video games (Halo3, Halo ODST). Mike’s blog journal can be read and his comics are available online at http://ultraist.net.

Each issue of Indie Comics Magazine will feature full stories from many different independent comic book creators, said Beatty. Short biographies and contact information are included with the stories so readers can easily seek out more of their favorite creators’ work.