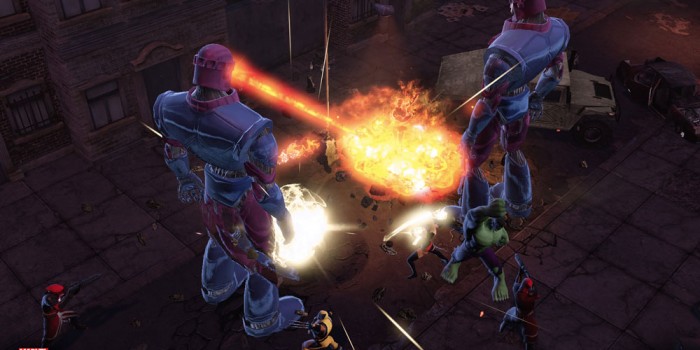 Actually, it’s been out for a few days, but anyway… after what seemed like, and apparently was, months of public testing, Gazillion’s free-to-play MMO Marvel Heroes is now open to the unwashed masses (i.e. those who didn’t see fit to invest in a $200 ultimate founders pack).

And… it’s pretty much unchanged from the version I played a few months back, with lengthy loading times, frequent crashes, and lag whenever too many players are on screen at once. Though to be fair, those kinks will hopefully be ironed out in the next week or so; compared to your average MMO launch it’s been relatively smooth. Nevertheless, Marvel Heroes is an oddly joyless affair: it features tons of recognisable heroes, villains, locations and costumes, yet rarely feels like a comic book game. Add the ridiculous character unlocking system into the mix, and it’s difficult to find a reason to want to invest time into it.

While playing Marvel Heroes yesterday, I kept thinking back to Playdom’s Facebook game Avengers Alliance. While I may have issues with that game’s exploitative attitude to microtransactions, every character in Alliance‘s turn-based combat feels like he/she/it was designed with the comic books in mind.  I can attack with Hawkeye with the confidence that he never (well, rarely) misses. Scarlet Witch’s hex powers run the risk of damaging her teammates as much as her enemies. Deadpool is reliably unpredictable.  Punisher is a jack of all trades equipped for every foreseeable situation. Hulk needs to be provoked to unleash his true potential. And so on. That sense of attentive homage to the comics which Avengers Alliance does so well is completely lacking in Marvel Heroes. Hawkeye plays like Iron Man who plays like Cyclops. Daredevil and Thing are pretty much identical at first. While the characters do distinguish themselves as they power up, the enemies do not. Whether your beating up street thugs, hand ninjas, Hydra agents or even bosses, the game’s seemingly identical antagonists never require you to strategise in even the slightest way, just grind and spend.