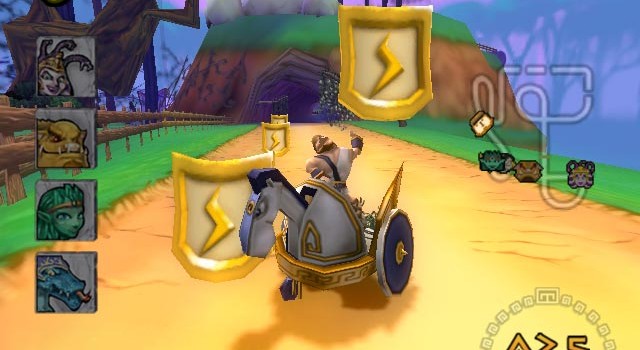 When Disney was still in the habit of adapting classic (and more importantly, public domain) novels and fairy tales, you could almost visualise the multitude of smaller straight-to-video animation imitators hurtling into production each time the House of Mouse announced a new movie. While the original PS2 version of Heracles Chariot Racing came out too long after Disney’s Hercules to be deemed a direct knock-off, it serves a similar purpose to those lesser animated entries, recreating that film’s atmosphere and style enough to appeal to younger and less discriminating gamers. Indeed, the game’s pastel palette is ripped straight from the Disney film of the same-ish name.

But this is not to say that the core gameplay in Chariot Racing isn’t capable; the effective controls and thoughtfully designed race tracks make this a far better buy than one might assume from merely glancing over the screenshots. Neko Entertainment, responsible for the recent WiiWare port Cocoto Platform Jumper, have resurrected this 2007 PS2 racer in a similar fashion, with Wii-tailored controls that are far from revolutionary, but hold up well. The nine available racers are a diverse bunch, ranging from the titular son of Zeus to the Minotaur, Medusa, a satyr… and, most bizarrely, an insect-woman named Beesy. Wouldn’t Athena have been a better fit? Hercules Heracles is the all-rounder, and will be a good choice for beginners, but overall the roster caters for every racing style. The tracks are also visually appealing, with neat flourishes such as Hades observing his Underworld track from above, while Cerberus shoots fireballs at competitors. Even Athena’s goggled Owl has got involved, assuming the role that Lakitu plays in the Mario Kart series.

The single player opportunities come in three flavours: Championship, Time Trial and the option to race against AI opponents on any unlocked track. The latter two are self-explanatory, as will the racing cups be to anyone who has played Mario Kart. While each cup contains five races, the tracks in each are variations on five mythical landscapes; an approach used in the Ridge Racer games. While the backgrounds are all distinguishable, and based on rich locations such as Hades, the Augean Stables and Mount Olympus, this recycling does make it difficult to distinguish certain tracks from others, and you’ll often find yourself allowing instinct to guide you straight into a newly erected wall.

Similarly, the fantasy-themed power-ups are a lot of fun, if also diminutive of similar games. Players can hurl tridents, drop mines or giant pillars, and even summon Zeus himself – though to ensure protection from such potential obstructions, player collect shields which serve the same function as coins in Mario Kart. Despite the limited landscapes and lack of modes, Heracles Chariot Racing actually controls pretty well, and is one of the few areas where the game doesn’t mimic Nintendo’s standard setter. Tilting the Wiimote causes your chariot to jump, while twisting the Nunchuck allows tighter turns; the analogue stick does the actual steering. It takes some getting used to, but it’s not a bad control scheme at all. The chariots themselves are a lot tougher to guide than the vehicles from many kart-based derivatives, too; all take considerable time to reach top speeds and have difficulty manoeuvring tight corners.

As well as the expected competitive race modes, there’s also Battle. Though the chariots aren’t quite as cut out for direct confrontations as their kart rivals, the four player split-screen is well implemented and plays as well as could be expected for a budget title. No online, unfortunately, though this is hardly unexpected given Nintendo’s reluctance to fully open up their console to the scale of online play that both the 360 and PS3 enjoy… and the fact that this is a WiiWare release.

Heracles Chariot Racing is a pleasant surprise, and far better than I’d initially anticipated. Mario Kart fans will find little to draw their attention away from that game’s online provisions, but at a mere 800 Wii Points it’d be missing the point to compare this game to a full retail release. As with Cocoto Platform Jumper there’s no widescreen support, but the colourful graphics and some pleasant character and environment designs just about hide the fact that this is a two year old PS2 budget release.

Sure, Chariot Racing is a Mario Kart clone, but there isn’t much else like it on WiiWare. At the same price as a retro release Heracles Chariot Racing offers enough to keep even the most jaded gamer entertained for a few weeks, and will appeal to anyone who appreciates the mythological monsters and locations… or just fancies a break from Nintendo’s ubiquitous moustachioed mascot.