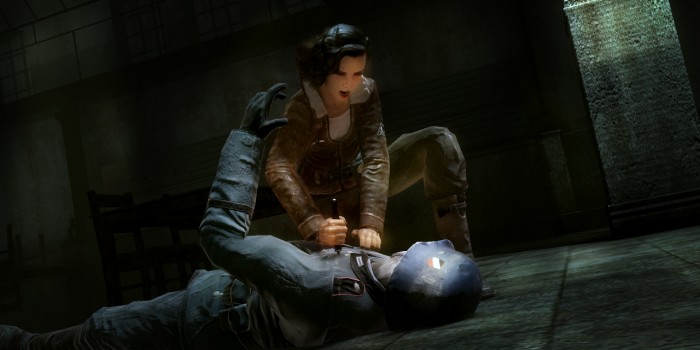 Though it will frequently test your patience, Violette Summer’s revenge quest offers a haunting yet surprisingly plausible depiction of war.

If Velvet Assassin had been made 10 years ago, its protagonist would likely have been a male, gravel-voiced, 80s throwback of an action hero. Today, game developers have wised up to the true potential of the third-person perspective – namely that your avatar’s rear is on-screen at all times – and favour producing games that feature a nimble heroin with a fine derriere. While it may be tempting to dismiss Velvet Assassin’s Violette Summer as one such leather-clad male fantasy, she’s far from your average game babe. OneChanbara: Bikini Samurai Squad this game mercifully isn’t. Velvet Assassin bears the distinction of being based on, albeit very loosely, the exploits of real-life secret agent Violette Szabo, a French perfume vendor who joined the British Army when her husband was killed in the Battle of El Alamein. But it’s doubtful that Szabo would have faced the challenges that her videogame analogue is up against; a brainless yet uncompromising AI, inadequate weapons and a trial and error gameplay approach to name but a few. There’s a decent game hidden cat-like in the shadows of Velvet Assassin, but to get any appreciation from Violette’s rampage of revenge you’ll need to overlook a great number of flaws.

It’s this adherence to some resemblance of fact that both makes and breaks Velvet Assassin. The story is credible, the missions believable, and the visually impressive environments are well designed, and if generally linear they usually allow you multiple ways of negotiating each area. As a captive Violette lays dying in a German hospital, she narrates the critical moments of her one-lady crusade. Much like the similarly flashback-driven Hitman: Contracts this effectively keeps you guessing of her final fate, but the plot is severely fragmented as a result. Violette’s reasons behind her personal war aren’t disclosed until late into the game, and provide an extra layer of depth as the back-story of Kratos did in God of War. Unfortunately, anyone with an interest in World War II, wartime espionage or simply the appetite to research a topic beforehand, will know that Szabo’s life ended in an ordeal of torture, rape, hard labour and eventual execution in a concentration camp. Knowing this does render Replay Studio’s decision to turn her story into a game (not to mention the loading screens illustrating her in her underwear) more than a little disrespectful. By adhering to this real-life tale, Velvet Assassin’s lapses in logic are more discernable than the self-parodying antics of Metal Gear Solid. Violette’s decision to wear clunky heeled boots on her stealth mission is all the more ridiculous, as are scenarios such as one in an underground fuel depot; you are warned that one shot from Violette’s gun will set off the surrounding flammable containers, yet the vigilant sentries will shoot recklessly at anything that moves.

Your armoury is extremely limited and Violette’s combat inefficiencies result in her kicking the bucket at every new frontier. Solid Snake had his nanotechnology sneaking suit, Sam Fisher his state of the art goggles… Violette has a knife. It would help if she was in any way proficient with it, instead of swooping lucklessly at alerted Nazis in a manner similar to the knife action from Resident Evil 4 and 5. Being spotted generally means instant death, as neither Violette nor her enemies can withstand more than a few shots. This may indeed be realistic, but makes for a frustrating trial and error approach, worsened only by inconsistent and illogical checkpoints. Death can often set you back by more than 5 minutes.

On the other hand, sneak ‘em up purists who have found that more recent Hitman and Splinter Cell entries could all-too often descend into third-person shooter territory may relish this ill-equipped heroine and her limited resources. The game provides you no radar; a simple but effective purple aura surrounds Violette when she’s concealed and a flashing health meter alerts you when she’s been spotted. Ammunition is also scarce, forcing you to act strategically. Should you risk a more intimate, hands-on approach or spend a precious bullet? Violette’s torch is near-useless too, as it alerts every guard to your position, and the WWII setting makes it unlikely that you’ll stumble over a pair of night-vision goggles with which to traverse the darker levels.

Most of the above complaints are squarely aimed at the game’s unforgiving early levels – the second level alone will see most players giving up. Once the game hits its stride, and you acquire items such as the flare gun and the bullet-proof vest, these challenges are often more manageable. The stealth kill sequences are excellent, with some creative variations; Violette can pluck the pin from a guard’s grenade belt, watching them wander back to their comrades and explode, and in gas-filled locations she’ll pluck the mask from her gasping victims.

Should your ammo run low, Violette also has a bizarre special ability known as Morphine Mode, a superhuman capacity attributed to her hospitalized present self being administered a shot of the drug. This effects her memory, causing time to slow and red petals to fall from the sky while she darts about in a white silk slip, temporarily able to execute one enemy from any direction. As a game device it works well, giving you a get-out-of-jail-card should you be spotted at an inopportune moment, even if it does shatter the level of realism that Replay Studios have worked hard at establishing. Velvet Assassin has some excellent visual flourishes, the Autumnal tutorial alone being nothing short of beautiful. The game plays intelligently with its palette; a red filter covers the screen when you are close enough to perform a stealth kill, while the display is bled of colour when Violette is shot down. The sound is particularly good; the atmospheric soundtrack does not once break from the game’s temperament, and adds a sense of claustrophobia to Violette’s measured progression. The doomed German sentries speak in subtitled German, unsurprising as Replay Studios is situated in Hamburg, and it’s an encouraging change from the usual hammy Nazi performances. Their conversations add emphasis to your mission, ranging from a petty argument over a chocolate bar to the sort of war atrocities that makes butchering them feel justifiable. But these representations aren’t purely black and white; other soldiers will criticise the war and voice their ignominy.

Velvet Assassin’s controls are pretty standard but sporadically problematic, due in part to their simplicity. On several occasions the game would not let me take out a guard because a corpse or switch was too close. Again, presumably to strive for realism, Violette is achingly slow, making it impossible to sneak up on a mobile guard until they stop completely. Experience points found in the form of antiques hidden in darkest corners allow you to upgrade Violette in three areas: her endurance, the duration of Morphine Mode, and the speed of the stealth stance. The latter of these is by far the most useful and is practically essential to make it though the trickier parts of the game. In fact, if this ability had been enabled from the very beginning the overall experience would have proven far more accommodating.

In many ways Velvet Assassin is this year’s Dark Sector; both games offer a worthwhile experience if you can look past their initial quirks. The story behind Violette Summer’s unattainable revenge on the Far Reich is worth enduring through the game’s most infuriating moments for.

If Metal Gear Solid 4’s second half didn’t offer you enough stealth, you just cannot wait until Sam Fisher’s return, or the story and setting behind Velvet Assassin interests you in any way, then its believable protagonist and brutal, uncompromising depiction of wartime espionage will perhaps have found its audience. But they’ll be need to be a brave elite, with nerves of steel and the patience of a Buddha.