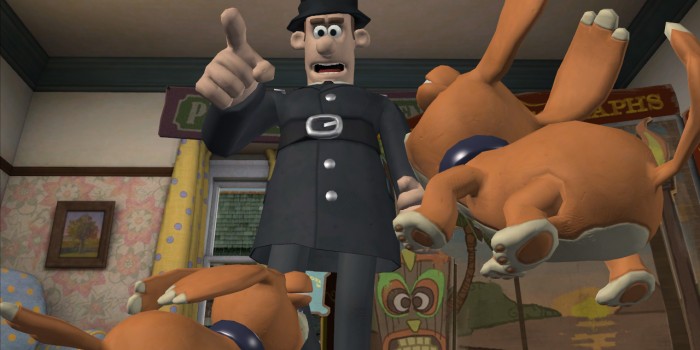 When Telltale Games announced Aardman’s Wallace & Gromit property as their next adventure game series, I had my doubts as to whether the California-based developer would be able to capture the quintessential Englishness of Nick Park’s claymation creations. The Bristol animation studio treats its flagship franchise with a level of intimacy, and over the years has developed a knack for capturing the tiniest nuances of British character. Fortunately, Episode 1 of Grand Adventures, entitled ‘Fright of the Bumblebees,’ encapsulated Aardman’s quaint charms perfectly. Could there be anything more English than a game that announces “Tea Break!” when you hit pause?

It goes without saying that, as anyone wise enough to have played either Sam & Max or Strong Bad’s Cool Game for Attractive People will concur, Telltale can do the funny. Yet while ‘Fright of the Bumblebees’ had its fair share of moments, a rather uninspired plot and some conventional puzzles took away from the immaculate virtualisation of West Wallaby Street that Telltale and Aardman had crafted. Telltale’s previous episodic efforts have always taken several instalments to work their magic, and ‘The Last Resort’ is no exception. Not only is it funnier than its predecessor, but it’s a more polished product in everyway possible, with an inventive storyline, better developed characters and some straightforward but entertaining puzzles. Anyone remotely familiar with the Aardman brand of humour will probably have guessed from The Last Resort’stitle that it centres around our duo’s decision to go on a traditional seaside vacation. Or at least it might have, had some “unseasonable weather” not encouraged good natured but ineffectual inventor Wallace to bring the sun, sand and sea to his own doorstep. Yes, Wallace’s latest business venture, West Wallaby Street Waterworld, captures all the fun of the seaside in the confines of his basement, and the few residents of Wigan, Lancashire are all lining up to attend.

While this brief synopsis might not sound particularly enthralling, what’s great about ‘The Last Resort’s plot is how wittily it defies expectations, soon developing into an Agatha Christie inspired whodunit, complete with the traditional closed-room denouement and a line-up of unusual suspects. Naturally, the criminal in question isn’t a depraved serial killer but ‘the thumper,’ whose dastardly crime goes no further than knocking one of the Waterworld’s guests on the noggin during a blackout.

As with Telltale’s other series, there’s already a sense of familiarity present in ‘The Last Resort’ that makes the experience akin to returning to a beloved television serial. The inhabitants of Wigan, from jobsworth Constable Dibbins to senile war veteran Major Crum, may be little more than Northern stereotypes but they’re an endearing bunch nevertheless. Burly Highland bully Duncan McBiscuit – quite possibly the greatest videogame moniker ever – makes his debut here, rivalling Wallace for the affections of green-fingered neighbour Felicity Flitt. Gromit is not without his own nemeses either, in the pocket-sized form of Miss Felicity’s duplicitous pooches Pudgie-Woo and Tinkie-Wee. The gameplay remains unchanged from Episode 1, with player control alternating between Wallace and his loyal companion Gromit, who regularly saves the day without ever receiving a crumb of recognition. Far more time is spent playing as Gromit this time round, as he dutifully strives to uphold his master’s latest invention, the crime-solving Deductomatic, by deducing the identity of the heinous thumper. Gromit may be mute (has he ever even barked?) but his facial expressions, often of dismay at Wallace’s incompetence, are priceless.

To go in line with Telltale’s focus on casual gaming, the frequency at which hints are dropped can be adjusted; though after Wallace has offered the same suggestion for the dozenth time you’ll likely want to switch them to a lower setting. The tutorial from ‘Fright of the Bumblebees’ is still present and has now been expanded to include an early scene from that game.

The visuals capture the duo’s Plasticine origins flawlessly, with detectable fingerprints and sculpting blemishes all adding to the game’s knowing quaintness. The storytelling is more sophisticated this time around, with the cutscenes and outright bizarre finale all purveying a far more cinematic experience than before. The voice acting is also superb; Peter Sallis isn’t present to add his talents to Wallace, but Aardman’s official replacement voice actor Ben Whitehead does a cracking job, if he does take some getting used to. Grand Adventure’s control scheme is an oddity, abandoning the purely mouse-driven controls of traditional point ‘n’ click adventures for a keyboard/mouse hybrid that infuriates more often than it works. I should add that while I played the majority of ‘Fright of the Bumblebees’this way, I used an Xbox 360 controller for ‘The Last Resort’. It worked surprisingly well, with the nifty ability to highlight all interactive objects easing the tendency to wander every environment clicking manically for clues. The shoulder buttons also enable you to scroll through each object or entity while the right stick serves a similar, albeit less accurate purpose. With the LIVE Arcade version of Grand Adventures still awaiting a release date, it’s a good indication of how smoothly this underappreciated genre can make the transition to non-Wii consoles.

If you’ve yet to play a Telltale game, the four episode bundle can be purchased online for $34.95, with the last two episodes due in late June and July. Once the entire series has been released, you can get the set on disc for the price of postage. Those who remain unconvinced by the virtues of episodic content can rest assured that the game will make it to retailers later this year, but there’s something heartening about finishing each brief episode (approx. 4 hrs) safe in the knowledge that another will be available in a few weeks time.

The more cynical gamer might argue that ‘The Last Resort’s gameplay is derivative, making little effort to improve upon its revered antecedents. And they’re probably right. But when a game feels as affectionately crafted as Wallace & Gromit’s Grand Adventures, it’s hard to bemoan some minor control issues and the persistent recycling of character models and locations.

I can’t imagine that all but the youngest gamers would find much of a challenge in ‘The Last Resort,’ but that’s essentially the point of a Telltale adventure game. Cool those trigger fingers and take leisurely pleasure in the gentle storyline and humorous characters. This episode is worth the price of admission for Major Crum’s barmy toy-soldier production of “Laurence of Olivier” alone.