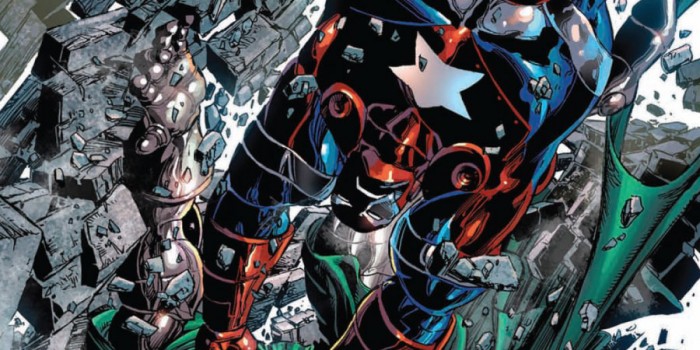 When the Dark Avengers series was first announced, its title struck me as a little odd. Darth Vader and Sith Lord company aside, modern antagonists rarely view themselves as actual villains. Doctor Doom, Lex Luthor and Magneto all proclaim to have humanity’s best interests at heart, their rightful rule hindered only by those darn pesky heroes. Fittingly, as Osborn perverts Marvel’s most esteemed super-team with a forthright and professional approach, it’s quite scary how good a job he’s doing as Stark’s replacement. One Swordsman through the window and a brief mental collapse aside, of course. Morgan Le Fay, a villain from Arthurian Lore, was a curious choice of adversary for the first Dark Avengers story arc, and I felt that her mystical powers jarred with the rest of the book. One reason Civil War and Dark Reign have proved so much more successful than Secret Invasion is that there’s a certain degree of grounded allegory in each; we can all appreciate a society being slowly ravaged by the suited criminals in charge. Le Fay’s time travelling abilities, which allow her to repeatedly cheat death, proved good fun but hopefully her involvement in the series, as well Victor Von Doom’s has ended for now.

At the centre of Dark Reign, Dark Avengers is an enjoyable enough title, but I’m curious as to whether this series has much of a future when Marvel’s crossover event draws to a conclusion. With Thunderbolts currently serving a very similar purpose, I can’t see there being a need for both series. Still, Bendis concludes this initial story arc as well as could be expected and Mike Deodato’s art is suitably grim – Doom’s reconstruction of Latveria was nothing short of magnificent.

There’s a lot to look forward to in Dark Avengers; the crack’s in Osborn’s unit have been visible from the get-go and if the brilliant final page is anything to go by, those cracks are about to be torn wide open.