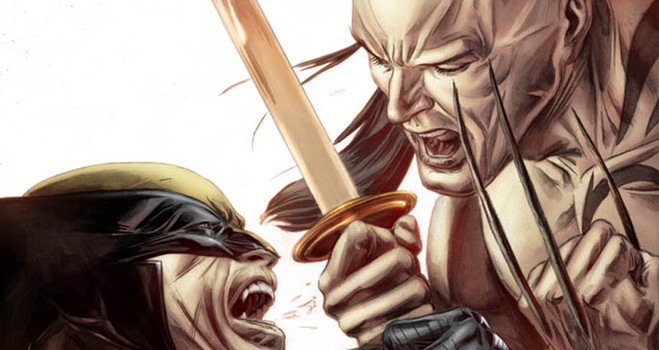 I’d hardly be going out on a limb to say that Daken isn’t quite the fan favourite his father is, or the antagonist Marvel wishes for. We’ve yet to see the character do or say one remotely interesting thing. Of all of Marvel’s most valued creations, Wolverine seems to be the one writers have a hard time with, as he lends himself to cliché all too well. Daken’s role as “Wolverine” in Norman Osborn’s Dark Avengers presents plenty of interesting story opportunities, but here Daniel Way has instead decided to pit father and son against each other for… well, the sake of it, really. Okay, that’s not entirely true. Daken is after the Muramasa blade, a mystical sword that has the power to cut through anything, as well as disable Logan’s healing abilities, and is currently in Cyclops’s care. Daken has used his part in Osborn’s Avengers publicity stunt to draw Cyclops out with said blade, though we’re still unsure as to why he wants to kill his father after finding out the truth behind his mother Itsu’s death. Maybe he’s just a nasty piece of work, through and through.

Despite this issue and the last essentially being one big Central Park slugfest, Daniel Way and artist Doug Braithwaite stage the action well enough. But this title has never really transcended beyond hackneyed, irrational comic book skirmishes that ultimately resolve nothing. Logan’s encounter with Victor Hudson, the mute, blind mutant ancestor of Alpha Flight’s Guardian (alluded to by Nick Fury in Issue 33) hints at little more than yet another senseless brawl.

However, Wolverine’s dilemma regarding his son is the one factor in Origins that still maintains my interest. Logan has always been the one X-man who will kill if need be, and it’ll be interesting to see how far Daken will push his papa before Logan’s primeval instinct prevails over his conscience.