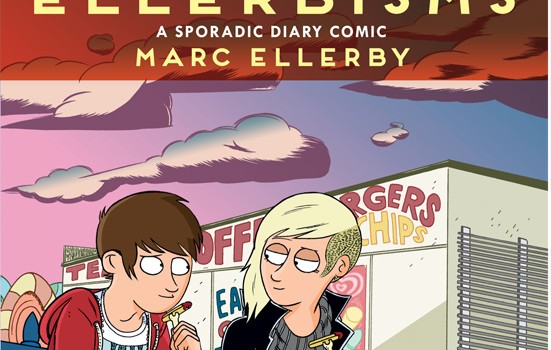 While loitering in Waterstones the other day, I was lucky enough to witness my girlfriend’s joy at discovering a comic book which actually appealed to her. The book in question was Ellerbisms, by local Essex-based creator Marc Ellerby, a charming collection of autobiographical cartoon strips. Emily loved the book so much that she decided to review it over on her literary blog dystopic.co.uk, and offer a fresh perspective from someone who doesn’t know comics but knows what they like:

Ellerbisms is a collection of short autobiographical comic strips that mainly hones in on the relationship between Marc Ellerby and his Swedish girlfriend, Anna. It also displays everyday life at its most exciting and its most tedious, captures the soul-destroying pain and intense euphoria that pursuing a creative career can evoke, and beautifully reveals the traits of a typical, modern day twenty-something; an excitable, guilt-enslaved idiot, too busy overthinking and underthinking and not thinking at all.

The whole thing is best described as irrelevant relevance, romanticizing the unimportant and downplaying the catastrophic. Turning a fleeting moment into a permanent one is strange, entertaining and thought-provoking, and it oddly forces the reader to consider their own life while reading the deeply personal thoughts of someone else.

Read the rest of the review here.

Anyway, after Emily devoured Ellerbisms in a single afternoon, I took her to my local comic book store in Southend, Ace Comics, where I hoped to nourish her blossoming appreciation for the funny books with some more non-superhero graphic novels.

Unfortunately, the store’s selection of books was pretty depressing, and we left empty-handed.

It wasn’t a lack of female-friendly titles that was the problem, but the visibility of such titles. Newcomers entering Ace Comics for the first time would be greeted by Marvel and DC’s weekly output, gaming cards and a whole ton of merchandise crap… but there were few graphic novels on display that would appeal to either the uninitiated or the fairer sex.

This struck me as somewhat baffling, until I returned home to read about Mark Millar’s misogynistic comments on rape and DC’s ill-advised Harley Quinn competition… and I realised that at no point did anyone take into account that female readers or readers-to-be (or even those wanting something other than bulging biceps, buxom babes and genre-driven violence) would ever enter the store.

Of course, there is material like Ellerbisms out there. You just have to find it. But unfortunately that initial hurdle will likely lose many a potential comic consumer in the years to come, as digital and self-publishing see creators struggling to reach their readership.

So, if anyone has managed to make it this far, could you possibly suggest any books that Emily might like? She loved Daniel Clowe’s Ghost World, and is now on David Boring. I was thinking Strangers in Paradise next… or perhaps Craig Thompson’s Blankets. Any ideas?