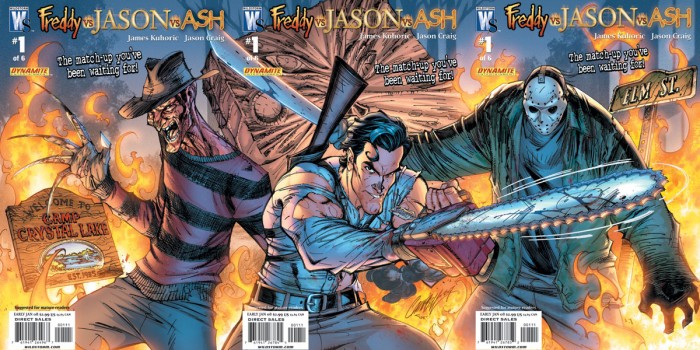 There was a time when Bruce Campbell was God to all geeks. A B-list actor who just happened to be the best looking out of a gang of aspiring filmmakers. An everyday guy amongst pretentious stars, who seemed quite happy performing cameos in his mate’s movies. But after the lacklustre My Name is Bruce, it became clear how easy it is to get carried away. You can have too much of a good thing.

Still, at least Bruce hasn’t sailed as far down the river as his Evil Dead alter ego Ash Williams. The chainsaw wielding deadite slayer has been used in so many crossover miniseries over the last few years that it’s impossible to get excited about them any more. He’s crossed paths with Re-animator’s Herbert West, battled Darkman as well as Dracula, encountered the Marvel zombies and been sucked into the era of Xena: Warrior Princess. Next month he teams up with Barack Obama – and that’s no joke. This six-part series sees Ash take on both Freddy Kreuger and Jason Voorhees, which might have been a more tantalising prospect had the same thing not already been done in 2007. The last series naturally took some liberties with its characters; Jason Voorhees now became the invincible undead giant we know and love when his deranged mother read the Necronomicon aloud. But that’s surely part of the fun, isn’t it? If nothing else, the fan reaction to Ash’s possible inclusion in a speculated Freddy vs. Jason sequel several years ago demonstrated how popular a film containing these properties would be. But as the Alien vs. Predator movies proved, good ideas only make good movies if adequately executed.

I do appreciate that this book is just mindless fun. Jason Craig’s lively art ensures that you get enough images of Jason reliving his victims of their entrails, and the entire premise is so ridiculous that you can’t help but marvel at the almost celebrity status these three characters have. But there’s a vital ingredient missing from this bloody mix: humour. Instead of going for a tongue-in-cheek parody of monster mash-ups, writers Jeff Katz and James Kuhoric have taken the whole thing a little too seriously.

The three incorporated franchises all began from humble ideas: a bunch of kids in an isolated cabin unintentionally raise the dead; a boy who died under negligent summer camp counsellors comes back for revenge; a murdered serial killer finds a way to continue killing through dreams. When silver-haired G-men plan on using the Necronomicon to build an army of the dead, you know the whole thing has gone way too far.