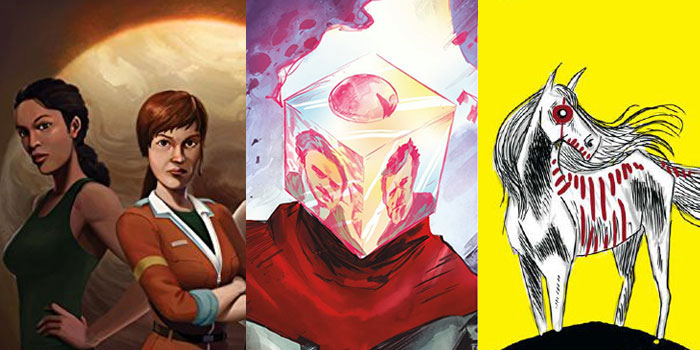 The problem with juggling so many projects is that I tend to work my way around to reviewing new releases way after the fact. Such is the case with Venus Rises: Exordium #2, which recently failed to fully fund its second issue on Indiegogo. A campaign I’d have gladly supported had I the time to read my damn emails.

Regardless, issue #2 continues its engaging sci-fi tale of a Venusian/Martian civil war told from both sides. Fifty years after Earth was quarantined, the scraps of humanity battle for the right to live on Mars, and against the wealthy bureaucrats who denied those who built paradise a right to live there.

Asset Protection Enforcer Hollister Pelt III is one of the haves, using Mars’ resources to search for the missing mining vessel Ikarus, via which Hollister’s path is (presumably) soon to converge with have-not Terry Holden, a salvager eking out an existence on the outskirts of the galaxy.

J. G. Birdsall is a really solid writer, and Venus Rises puts its characters and their allegorical plight first and foremost. New series artist James Newell gives the world a newly downtrodden aesthetic with more engaging and dynamic characters, though I did miss Thomas Garbarini’s distinctly sterile spacecraft. This work of “proper” science fiction deserves a larger audience, and given the extent of the worldbuilding on display I look forward to seeing Birdsall further develop his multimedia universe.

Visit venusrises.tv for all things related to the sci-fi saga.

This extremely postmodern delight from Ryan O’Sullivan (Void Trip, Turncoat) and Andrea Mutti (Infinite Dark, Port of Earth) keeps popping up on my radar, and it’s easy to see why. From the very first page, in which pretentious writer Henry Henry eviscerates the nine-panel grid to hilarious degree, O’Sullivan’s unlikeable protagonist does not cease deconstructing the trite fantasy plot he’s stuck in, or indeed the sucker reading it.

When acclaimed writer Arthur Proctor is visited by the Muse, she doesn’t bestow upon him the seed of a masterpiece, but rather teleports him to the Fearscape, a fantastical realm colonised by the greatest fears mankind has ever dreamt up. The Muse plucks the greatest Storyteller from every generation, see, and pits them against the Fearscape’s nightmares for the sake of humanity. There’s only one issue: Proctor is in fact Henry Henry, a loathsome hack who stole the dying author’s final manuscript and passed it off as his own.

Andrea Mutti fills his world with warped creations, most notably the Hero of a Thousand Faces, and colours by Vladimir Popov and lettering by Derron Bennet make Fearscape, a cross between The Unwritten and Seven Psychopaths, a joy on every page. My only issue with the series is that four issues in, I’m beginning to tire of delusional scribe Henry Henry, a character so irreprehensible that he’s essentially a psychopath, but I suspect O’Sullivan will redeem him soon via the sort of clever plot twist that Henry himself would debunk with malicious delight.

Fearscape is published by Vault Comics and currently on its fourth issue.

This eclectic quarterly horror zine is from Katie Whittle and Tom Smith, the folks behind the rather nasty Take Only Photographs, Leave Only Footprints, which I enjoyed very much. Each issue of Knock Knock features a selection of prose and comic shorts based around a distinct theme. In the case of the eleventh and most recent edition, this theme is Pestilence.

As with similar indie anthologies, Knock Knock presents a mixed bag of traditional genre work from newcomers and some more inventive, idiosyncratic shorts that might not find a home elsewhere. E.G. Bivins’ brutal ‘Zootic Planet’ and Michela Cicconi’s bleak ‘Never Just a Cold’ are definite highlights that deserve a quick read.

Partially funded by Patreon, Knock Knock also has a great distribution concept behind it: all contributors are given a digital copy of the zine and encouraged to print it themselves, providing them an additional platform via which to promote themselves at conventions and fairs.

The issues are also all available to read freely at www.frissoncomics.com.