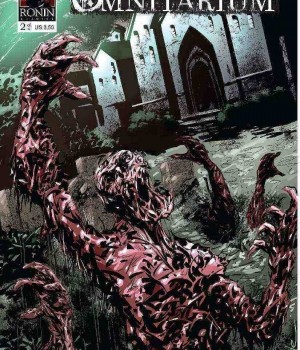 Issue 1 of Jamie Gambell’s sinister period horror Omnitarium was a book of two distinct acts. An action-packed prologue detailed the execution of cultist Harrow Moonheart a century before the main events of a second, slower and more ominous half set within the confines of the fictional London Pentansly Gaol, 1868. While the two plot strands are closer to converging in Issue 2 of Omnitarium, it’s a similarly taut, slow-burning episode that plays on the first issue’s ambiguity. The evil that inhabits Pentansly is recurrently touched upon but never fully exposed. In a manner that reminded me of the more Gothic Tom Baker era Doctor Who plots, Gambell revels in tightening the screws on his characters, none of whom display an iota of trust in one another, while the security of the institution around them slowly crumbles. From the final page of this issue it’s clear that things are about to get silly (in a good way), and it’s nice to see Gambell spending generous time on both his cast and the more grounded elements of the plot.

That said, a scene revealing some anachronistic mechanisms within the titular inner-gaol threw me for six. It’s an unexpected plot development for sure, but one that not only throws an element of steampunk into the book’s blend of supernatural fantasy and period horror, but feels credible within the series’ own unique reality.

J.C. Grande’s art is fantastic, and has a confident, loose style that suits the 19th century prison setting and its more monstrous inhabitants. His work on facial expressions is both distinct and consistent, and the heavy inking that occasionally distracted in the previous issue is now thoroughly absorbing. Not only has Grande’s art improved drastically from the previous issue, but he also manages to more effectively convey Pentansly’s abstract surroundings.

Omnitarium has been a blast so far. Jamie Gambell’s tense pacing and Grande’s atmospheric art make for a great read, and this four part series is getting more intriguing by the issue.

Issue 2 of Omnitarium will be available later this month. Issue 1 is currently available from IndyPlanet for $3.50. Alternatively, a digital copy can be purchased from Drive Thru Comics for just $0.99.