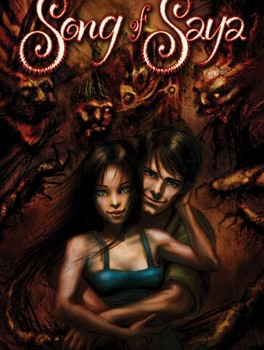 A young doctor’s promise is cut short when a car accident kills his parents and leaves him in need of experimental brain surgery. Josh finds his perceptions warping from between our established reality and a hellish landscape of organic, haemorrhaging structures and hideous physiognomies. Now confined to the hospital he once worked in, Josh is frequently visited by a beautiful woman named Saya, who claims to be looking for her father. IDW’s new Lovecraftian horror series is based on Japanese video game/interactive novel Saya no Uta, transporting the premise to America. I wasn’t at all aware of this while reading Saya; supposedly writers Daniel Liatowitsch and Todd Ocvirk made several amendments that would sit better with Western readers when they translated the plot. The script itself feels surprisingly intimate, and is a notch above any of the more recent, recognisable videogame to comic adaptations.

Anyone who’s seen Jacob’s Ladder may find themselves in all too familiar territory, but Song of Saya’s first issue is an atmospheric and memorable enough read. If you haven’t heard of the video game, don’t let that deter you – this intriguing new series stands up well enough on its own.