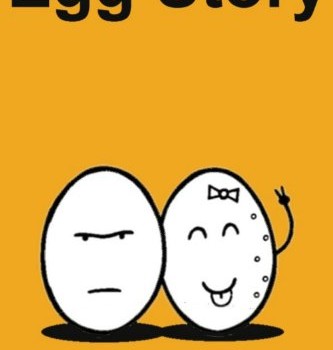 Comic artists, animators and cartoonists have anthropomorphised everything from dinosaurs to wabbits, but outside of Humpty Dumpty I’d be hard pressed to name another tale committed to sentient eggs. A dark comedy on the fragility of life, Marc Schmidt’s Egg Story chronicles the beginnings, ends and omelettes of a half dozen doomed foodstuffs. The eggs’ journey through farm and supermarket ends with a Death Row stint inside the fridge of one Julie, who thinks nothing of cracking open the condemned and feasting on their warm gooey innards. The heartless bitch. Feather, Five Spots and Cloud soon find themselves the sole survivors, and vow to enjoy the remainder of their shelf life before they hit the frying pan.

Egg Story‘s finest moments, such as Connor’s mental deterioration following damage to his shell, have a beautifully surreal indie sensibility to them, and while the book occasionally  suffers a bit of an identity crisis – Feather’s quest to become a ninja feels like the uninspired concept for a Dreamworks animation – there’s a sense of melancholic acceptance throughout that carries this otherwise bleak existential comic.

SLG has priced Egg Story at a stupidly low $3.95, and I’d recommend this pint-sized graphic novel to any reader who hasn’t already scoffed at the premise. Schmidt hasn’t strived for as great a degree of subtext as was found in SLG’s recent translation of Elmer, and the result is a book that revels in its own oddness. A scene in which Five Spots tells a chick that has recently hatched from her lover’s shell that a relationship between egg and poultry would never work has to be one of the strangest things I’ve ever read…