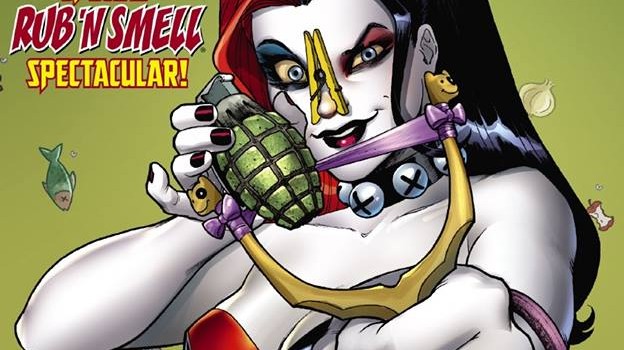 DC’s recent “rub-and-smell” Harley Quinn Annual #1 made it apparent that the titular character is now the publisher’s Deadpool, with the quirky Quinzel’s newfound ability to break the fourth wall incessantly and with maximum irreverence proving a fine entry point for new readers baffled by Grant Morrison’s multiple universe shenanigans. But a problem arose when it came to adapting the annual for digital formats, as the issue’s humour relied on the scratch ‘n’ sniff novelty for full effect. The DC2 edition, then, offers a dynamic take on the original physical edition, featuring fresh gags, pop-up effects and other enhancements to compensate for the average tablet’s inability to emit a foul stench. It’s available now from ComiXology.

If the scented comic smacked of the sort of gimmickry that had speculators buying ten copies of such issues in the 90s, the digital edition just shows… DC’s lack of faith in its writers’ ability to tell a good story, I guess. However, Amanda Conner and Jimmy Palmiotti have apparently written new gags to make Harley’s digitally enhanced annual “a fun and special experience for digital readers,” so at least there has been some level of thought put into this adaptation. Maybe I’m just too old and tired to “get it” any more. I mean, Marvel’s announcement of an Attack on Titan crossover earlier today left me feeling equally confused and isolated: