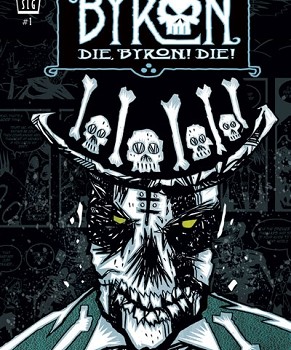 Comic Book Series to be Released Initially as a Digital Download

Press Release: Once you have survived drugged toads, vampire attacks, and the attempted realignment of reality. What else in life can possibly phase you. Karl Christian Krumpholz tackles that question as his erstwhile hero Byron returns for another set of adventures in an all new comic book series Byron: Die Byron Die, from SLG Publishing.

Now thinking of himself as some sort of ‘Psychic Investigator’, he’s on the road, entering the wild places of America and searching for his missing brother, H.P.. How hard can finding a talkative two-headed pickled punk be? America may a big place after all, but such things tend to stand out. The first Byron story, Byron: Mad, Bad and Dangerous, was released as a graphic novel by SLG Publishing. The publisher has decided to do the initial release of Die Byron Die as digital comics serializing them in downloadable form. Issue #1 and #2 of the series were released on the SLG Publishing website as ePub and PDF files and will follow on all of the companies digital partners application at some point in the future. Issue #1 of the series is free and the subsuquent issues will be 99¢.

“The decision to go digital first with new releases has been popping around in my head for some time” said SLG president Dan Vado “The state of the marketplace kind of dictates that we, at some point, try something like this as a brand and market building exercise” then adding “we need to find out if the demand for digital comics extends to our type of comics and to what extent people who want our kind of material will support this method of distribution.”