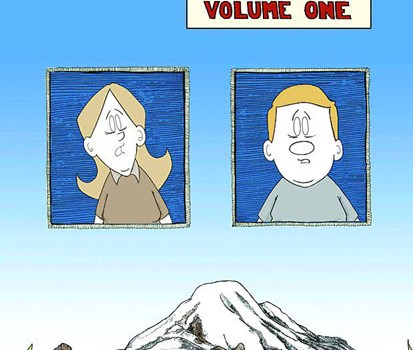 Press Release: Jenna’s life is stagnating. Her husband is a slacker, her job isn’t worth the stress, and hypochondria is her only diversion. That is, until she starts getting symptoms of what doctors are calling “the worst disease in the world,” and it’s not all in her head. Loserville, a new SLG Publishing graphic novel by Alex Cox to be published in June, explores what happens when one woman’s life gets interesting. Diagnosed with multiple sploderosis, Jenna knows that at any moment, she may explode. But with a little help from her subconscious mind, a wise advisor called Ice Cream Larry, and some mysterious portals, Jenna just might use the bad news to take back control of her life.

In creating Loserville, Cox was inspired by a friend who had to cope with receiving a life-changing diagnosis of multiple sclerosis. “She diagnosed herself on the Internet and I thought she was crazy, and then she actually had what she diagnosed herself with,” said Cox. “So the story is basically about what happens when someone is diagnosed with a horrible disease, in this case a disease where you might explode. I wanted to explore how the thought of ‘you might, or might not, explode’ affects someone’s life and relationships.”

Another influence on Cox’s work was the surrealist Franz Kafka. “I befriended Kafka. I read some stories,” he said, adding, ” I don’t if it’s true, but he I heard he also worked in insurance to support his writing and it drove him crazy.”

Loserville Volume One: And Then You Might Explode is scheduled for a June 2011 release and will be available at better comics and book stores as well as at Amazon.com and from the publishers own website. Digital versions of the book will be made available through Comixology, Panelfly and iVerse.

Established in 1986 and celebrating its 25th anniverary, SLG Publishing is a San Jose, California-based publisher of comic books, graphic novels and related merchandise. Some of SLG’s more notable comics have included Johnny the Homicidal Maniac by Jhonen Vasquez, Elmer by Gerry Alanguilan, and Pinocchio, Vampire Slayer by Van Jensen and Dustin Higgins. www.slgcomic.com