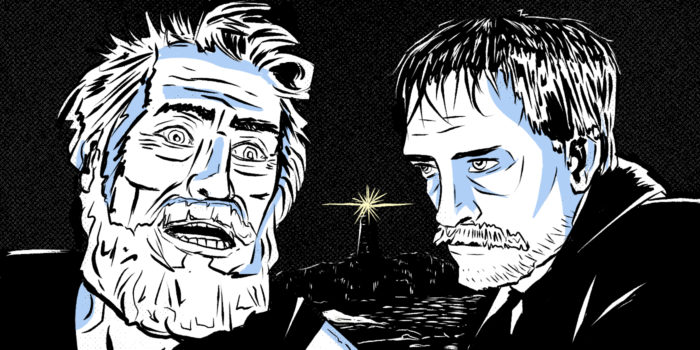 In the second of a new column format, I ramble on about depression, Death Stranding, Metal Gear Solid, auteurship, creator-owned comics and digging oneself out of a creative rut. I also admire The Lighthouse, and look at David Robertson’s awesome late 2019 release, Bell Time.

One tell-tale sign that depression is kicking in is that I find it increasingly difficult to enjoy things.

Music makes me feel genuinely nauseated. Cooking makes me want to cry. Every book or television show feels like a waste of time. When the depression lasts long enough, you begin to wonder if it’s you or if indeed the art you’re consuming just isn’t that great. Mercifully, it’s usually if not always the former. Quite unexpectedly, it took Kojima Productions’ latest video game, Death Stranding, to get me wanting to build my own worlds again. The unique gameplay mechanics, the barren post-apocalyptic landscape and Norman Reedus’ empathic protagonist were quite unlike anything else I’ve ever experienced.

I followed Death Stranding up with a complete playthrough of the Metal Gear saga in chronological order, over the Christmas holiday and beyond, something I’ve planned to do ever since Metal Gear V: The Phantom Pain released. I’m a massive fan of Hideo Kojima’s work, and despite the series’ problematic sexism, often embarrassing dialogue and comically erratic tone I cannot think of any other contribution to the medium that matches MGS in terms of ambition. Kojima’s storytelling lies somewhere between that of a gynophobic adolescent and an autistic genius. His worlds are never remotely plausible, sure, yet he always weaves a multitude of complex themes and original concepts through his games with unparalleled dexterity and confidence.

Usually I tackle depression head-on, throwing myself into work and schedule until it passes, but I’ve come to realise that the problem often stems from the fact that I don’t let myself enjoy life enough. So I’ve been doing just that, working full-time and spending my evenings taking walks along the beach, gaming or catching up on TV shows (The Leftovers was incredible). It’s been fun. I don’t allow myself to be lazy nearly as much as I should, to enjoy art and fiction without any sort of ulterior motive.

And then it happened. A few months into my creative hiatus I woke up one morning with renewed energy and a gnawing emptiness that could only be filled by self-expression.

So here we are. Again. My every hour filled with work, crippling inertia or the lengthy internal battle that is required for me to actually sit and produce anything. Oh, to live in the now!

To meander back to Kojima, my Metal Gear marathon left me itching to find the work of other video game auteurs making big budget games. I’m aware that video games, much like films, are usually a collaborative project that comprise the vision of thousands of creatives. I’m not entirely convinced that auteurship can even exist in such a medium outside of low budget indie work. Nevertheless, I like to connect the dots between the art I consume, and enjoy a consistent voice over several disparate projects.

The Japanese have their own small pantheon of revered game directors, but none manage to combine Kojima’s distinct quirkiness, experimentation and slick AAA presentation.  I tried Taro Yoko’s Nier and Drakengard series, but neither really did it for me – Nier Automata had some great ideas but a seriously overinflated option of itself. I feel the works of Suda51 and SWERY try too hard to be odd, with a few genuinely brilliant exceptions such as Killer7 and Deadly Premonition.

Kojima is arguably an anomaly in corporate gaming product, then. And so… my quest to find a substitute brought me back, as most things in life do, to creator-owned comics. A medium where creators can still experiment with minimum interference from editors (mainly because comics make fuck all money), and you can follow a writer or artist’s progression through numerous works. Comics are so deeply intertwined in everything I do, from this here blog down to my graphic design work, which is more often than not inspired by panel composition. Whenever I read a comic after a few weeks without it’s like sprinkling water on arid soil.

I love the values of creator-owned and self-published comics, which seem to stand stubbornly against other more restrictive storytelling media right now. The indie comics scene is forever changing at a breakneck pace but never losing sight of what made it so special to begin with. The comic industry itself is likely to suffer a heavy blow from the global coronavirus lockdowns, but I’m certain that won’t stop talented creators continuing to produce brilliant, personal comics (even if in a reduced capacity). While the coronavirus is a terrible thing and not to be treated trivially, I’m excited to read some post-pandemic sci-fi comics.

The prolific Dundee creator has contributed to dozens of anthologies, published numerous volumes of his own work via his Fred Egg Comics imprint and written on the medium for decades. Bell Time, which I believe began life as a webcomic, offers a fun twist on the body swap shenanigans seen in such movies as Big and Peggy Sue Got Married. Hapless schoolboy Lenny McNeil wakes up one morning in the body of a teacher at the school he begrudgingly attends, in a future that is drearily similar to his present bar fancy sci-fi cars.

Robertson’s work tends to fit into either the semi-autobiographical or the surreal, and Bell Time is a far more muted affair that’s mostly planted in the former. There’s something achingly bleak and existential about Lenny’s experiences of adulthood, as he’s forced to relive the same day again and again, the Groundhog Day that is working life. No life-affirming lessons are learned from his journey into a possible future, and he ends up exactly where he started. Grim.

I’ve reviewed a couple of Robertson’s previous efforts over the past few years: Break the Cake (a selection of Robertson’s 80s and 90s efforts) and But A Dream! (a similar selection of personal and abstract comics but with a ton of contributions from guest artists). You can read some of his other work for free and decide whether or not his brand of strange is for you at www.fredeggcomics.com.

Finally, this week’s featured image sketch is from The Lighthouse. A few weeks back we were lucky enough to find a cinema showing Robert Eggers’ sophomore effort, and even luckier to do so before the entire country entered lockdown. It proved every bit as interesting as his 2015 debut The Witch. Willem Dafoe and Robert Pattinson both gave career-defining performances, and the film’s claustrophobic aspect ratio and black and white imagery make for the sort of singular vision that demands repeat viewings. A24 has built its reputation on backing the sort of projects that originate from a unique artist vision rather than a commercial goal, and I’m sincerely grateful that movies such as The Lighthouse still exist.