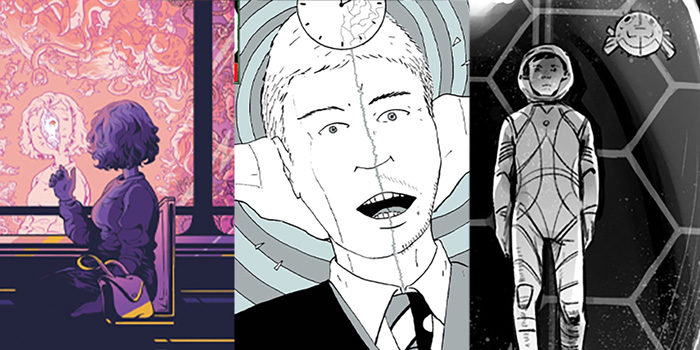 This is Indie Penance, my regular measure of casual mini-reviews focussing on the finest, craziest and/or most notable indie projects and creator-owned comics to have come my way.

What is this, a new Indie Penance?! You thought it was dead?

That’s correct, strange voice in my head. It is and it was.

While I won’t be returning to writing full comic book reviews, I have decided to resume the Indie Penance piece, almost a year after the last one was published. I’ve been meaning to do so for a good few months but depression, COVID blues, property drama and a variety of technical issues with the Shelf Abuse site and server got in the way.

The majority of those website issues should have been fixed now, but I’ve noticed that people are struggling to search for older reviews via the site. So, to test the waters I’m uploading a few of the reviews that were originally embedded into my short-lived 2020 column format (which I also plan to resume soon, sans reviews). I’ve also renamed most of the older Indie Penance pieces to better indicate the books featured. New reviews will be up in a few days. Don’t Go Without Me

Published by ShortBox, Don’t Go Without Me is a trilogy of short stories that all deal with reminiscence and existence. By far the best of the three is the Eisner-nominated ‘What Is Left’, in which a spaceship fuelled by memories malfunctions and leaks into space. The titular ‘Don’t Go Without Me’ feels almost like a companion piece, following a woman’s search for her lover after they are sucked into an alternate reality that feeds on reminiscence.

Rosemary Valero-O’Connell (Laura Dean Keeps Breaking Up With Me) is an incredible artist. Her work has a poetic, metaphysical quality that reminded me of Gibli movies such as Spirited Away, crafting beautiful and haunted dreamscapes in which anything goes.

Don’t Go Without Me is available now on the ShortBox site, in a beautiful gold embossed physical edition. Bell Time is the latest self-published effort from David Robertson, whose work embodies everything I love about indie comics.

The prolific Dundee creator has contributed to dozens of anthologies, published numerous volumes of his own work via his Fred Egg Comics imprint and written on the medium for decades. Bell Time, which I believe began life as a webcomic, offers a fun twist on the body swap shenanigans seen in such movies as Big and Peggy Sue Got Married. Hapless schoolboy Lenny McNeil wakes up one morning in the body of a teacher at the school he begrudgingly attends, in a future that is drearily similar to his present bar fancy sci-fi cars.

Robertson’s work tends to fit into either the semi-autobiographical or the surreal, and Bell Time is a far more muted affair that’s mostly planted in the former. There’s something achingly bleak and existential about Lenny’s experiences of adulthood, as he’s forced to relive the same day again and again, the Groundhog Day that is working life. No life-affirming lessons are learned from his journey into a possible future, and he ends up exactly where he started. Grim.

I’ve reviewed a couple of Robertson’s previous efforts over the past few years: Break the Cake (a selection of Robertson’s 80s and 90s efforts) and But A Dream! (a similar selection of personal and abstract comics but with a ton of contributions from guest artists). You can read some of his other work for free and decide whether or not his brand of strange is for you at www.fredeggcomics.com.

The equally heady Genu Volume 1 also deals with the nature of reality, but its storyline is backed by plausible, if currently impossible, hard science.

In a hundred years from now, mankind has survived Earth’s finite resources planet by retreating into Data Earth, a global virtual reality program powered by a solar energy farm on Mercury. When a micro-meteoroid shower devastates Mercury’s sun factory, three miners are rescued by a mysterious and advanced humanoid life form whose arrival threatens the future of homo sapiens.

Genu is a dazzling display of ideas and world building from Tommaso Todesca, Alex Franquelli and Giulio Srubek Tomassy, a trio of diverse and transnational writers. I loved the metafictional extracts that preceded each section (from the manifesto of the underground “Technology Is Nothing” movement), and a section after the story that explains the 22nd century science in greater detail. Aleksandra Fastovets’ brilliant monochrome art has an almost unfinished urgency and storyboard quality to it, accentuated by some sleek tech designs and surreal structures that really set the series apart. There’s a lot going on in this first volume of five, and I had to read it twice to fully appreciate it. But hey, I’d rather be confused than bored, and Genu is anything but boring. The press materials that accompanied my review copy suggest we’re in for quite the trip.